High Rollers battle it out at the National Playoffs!

We The High Rollers battled it out at the national league championships in Sheffield at the EIS ( English institute of sport ) this weekend.

In our first game we faced Glasgow Rocks. They have a big organisation and a well supported team and they got the better of us on the day.  The score at half time was only 1 point difference but they come out after the break with some fire and won the quarter by 8 points.  We had a good run and got back within 1 point.  Glasgow rocks managed to keep the lead and hit a few more big baskets and the score ended 37 – 42. Lahmar’s experience showed by scoring 20 points and playing some good defence. For Charlie and Mason, it was their first playoff experience. They done well for rookies, but still lots to learn.

On Sunday we played for 3rd /4th place against Cardiff Met Archers.  It was an early start for the team, and it took us a while to get started. We got a defensive stop then a big fake and drive to the hoop from Rob Hubert got us the go ahead bucket. The momentum was on our side now and we started rolling.   Stuart Newton was on fire, showing his shooting expertise and height. He come away with 16 points and 19 rebounds.  Our two rookies learnt from their mistakes yesterday and both played a great game, up until Mason Billington got flipped by a Cardiff player. As he fell, his head collided with another Cardiff players wheelchair and the blood hit the floor!

After the medics had removed all the blood from the court, the game continued. Tim Bohr showed some great poise and Charlie, our youngest player aged 14, put on a little show of how good he can be if he keeps working hard.

High rollers finished their first season in the 3rd division, winning league and getting

promoted to the second division. 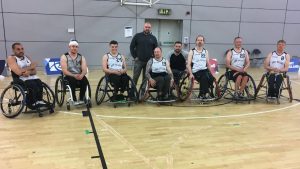 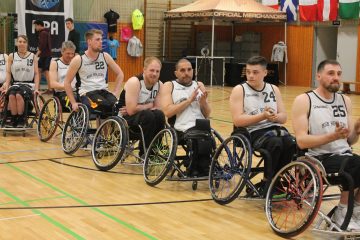 Here at High Rollers HQ, we are very happy to announce our Community Partners who are on board to help not only the sport of wheelchair basketball, but the community around the sport. Make sure Read more…

We are happy to announce we are now working in partnership with The Paralympic Experience and we can now offer businesses and schools or as a team building experience. If you want to know more, Read more… 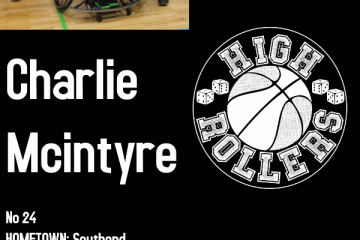 We will be reaching out to businesses to get in partnership with High Rollers! There is the chance to sponsor a players or the team its self. Stay tuned for updates  and interactive player cards!